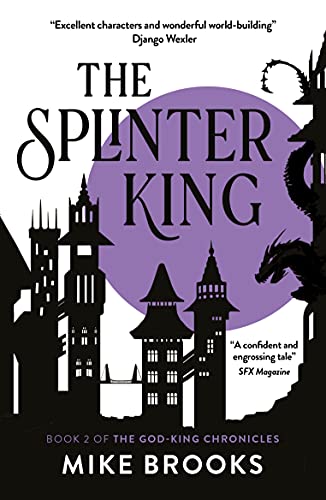 Brooks delivers an outstanding tale of honor, religion, politics, and crime in his second Chronicles of the God-King fantasy (after The Black Coast). In East Harbour, capital of the island realm of Kiburu ce Alaba, street kid Jeya continues to help the last surviving child of the Splinter King, who has taken the name Bulang, to hide from the assassins who killed Bulang’s family—but now someone is targeting Jeya’s friends and allies. In southernmost Narida, Daimon and his new Tjakorshi wife, Saana, rule over the combined peoples of his Black Keep and her Brown Eagle Clan as a contingent of their rivals from Darkspur come to visit. Meanwhile, Daimon’s foster brother, Darel, travels with the Southern Marshal to the Naridan capital, Idramar, to face the judgment of God-King Natan III, even as Natan’s sister, Tila, faces her own justice for murdering Narida’s Lord Admiral. And in the background, rumors mount that the god Nari has been reborn. As if all of this weren’t enough to whet readers’ appetites, Brooks throws in pirates, treachery, witchcraft, combat, and dragons to create a whirlwind of drama and intrigue. Epic fantasy readers will find characters to cheer for and action to love in this excellent sequel. Agent: Alexander Cochran, Conville & Walsh. (Sept.)
close
Details