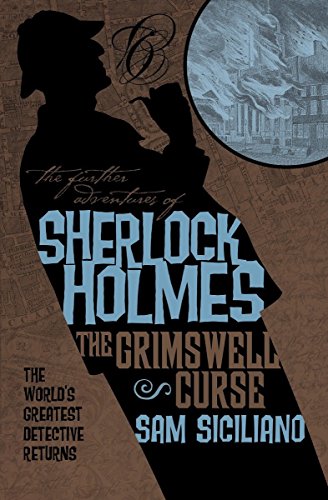 The Further Adventures of Sherlock Holmes: The Grimswell Curse

Siciliano pulls off an impressive feat in his third pastiche (after 2012's The Web Weaver), crafting an homage to The Hound of the Baskervilles that is genuinely creepy in its own right. As in his previous two Holmes novels, Siciliano has substituted the detective's cousin, Dr. Henry Vernier, for Watson, but that change will bother only purists. The duo are drawn into a terrifying case after they are consulted by Lord Frederick Digby, who has just been dumped by his fiancée, Rose Grimswell, because her father, Victor, who died in a fall from a Dartmoor tor over four months earlier, won't allow the union. Rose had recently learned of the legend of a family curse, dating back to the 15th century, involving an ancestor rumored to be either a vampire or a werewolf. After Rose flees London for her family's home on the moors, Holmes and Vernier follow, in an attempt to save her life from a malevolent force. Siciliano sustains a sense of supernatural menace throughout, and couples that with a convincing portrayal of the master detective. (Nov.)
close
Details