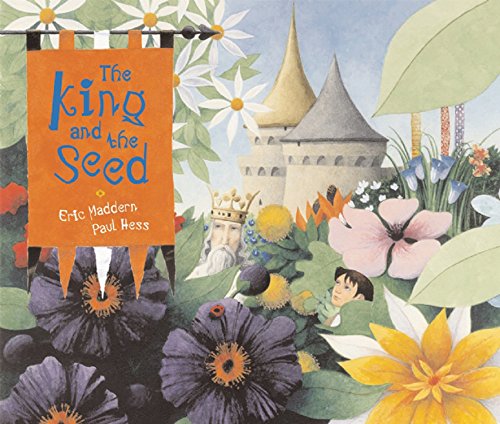 The King and the Seed

Maddern and Hess (collaborators on , among others) revisit the story of the farm boy in a land whose king distributes seeds, saying he will award his throne to the most successful grower. On the appointed day, Jack's is the only seed that has failed to sprout, and Jack reluctantly confesses his failure before a throng of lords and nobles, whose pots are filled with blossoms. But the King shocks Jack with a confession—“I don't know where those knights got their wonderful flowers from.... I boiled those seeds for a whole hour before giving them out”—and, for his truthfulness, Jack is appointed the king's heir. Hess paints with smooth, careful strokes, hiding Jack in a crowd of knights in splendid armor and gorgeously adorned helmets, zooming in on the king's bejeweled but aged hands as he distributes the seeds, and watching along with the spectators as the king leans down to confer with Jack. This retelling, set in medieval Europe, will appeal to fans of gallant knights, and the story's twist remains provocative. Ages 5–9.