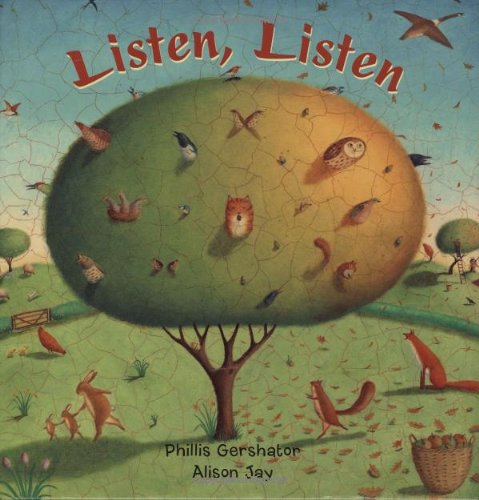 Although Gershator ( ) and Jay ( ; reviewed Sept. 3) aren't entirely in sync in this sound-driven journey through the seasons, it hardly matters, as Jay's magical and occasionally eerie crackle-glaze oil paintings furnish a visual feast. The text is built around a series of rhyming, gentle directives to attune one's ears: “Listen, listen... summer's gone. Good-bye insects, autumn's come.... Honk, honk, geese call. / Swish, swish, leaves fall.” But while Jay picks up on some of Gershator's visual cues, her pictures are more about fantastic versions of small-town life: geese flying overhead exude a Hitchcockian menace, and two cats toasting their paws before a winter's fire look so plump and sated that one wonders if maybe dinner consisted of their human owners. It sounds rather bizarre, but the richness and detail of Jay's universe will utterly captivate children. Ultimately, the real journey in this book is less about seasons and sounds than where Jay's imagination takes her and her audience. Ages 4-9.