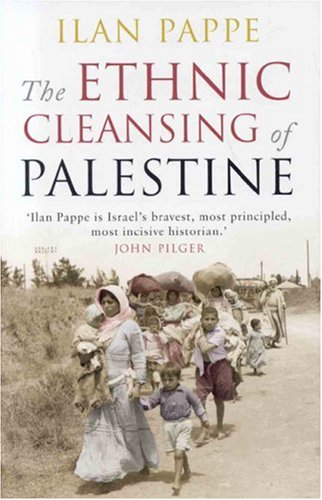 The Ethnic Cleansing of Palestine

In his latest work, renowned Israeli author and academic Pappe ( ) does not mince words, doing Jimmy Carter one better (or worse, depending on one's point of view) by accusing Israel of ethnic cleansing and crimes against humanity, beginning in the 1948 war for independence and continuing through the present. Focusing primarily on Plan D ( , in Hebrew), conceived on March 10, 1948, Pappe demonstrates how ethnic cleansing was not a circumstance of war, but rather a deliberate goal of combat for early Israeli military units organized by David Ben-Gurion, whom Pappe labels the â€œarchitect of ethnic cleansing.â€ The forced expulsion of 800,000 Palestinians between 1948 and 1949, Pappe argues, was part of a long-standing Zionist plan to manufacture an ethnically pure Jewish state. Framing his argument with accepted international and U.N. definitions of ethnic cleansing, Pappe follows with an excruciatingly detailed account of Israeli military involvement in the demolition and depopulation of hundreds of villages, and the expulsion of hundreds of thousands of Arab inhabitants. An accessible, learned resource, this volume provides important insights into the historical antecedents of today's conflict, but its conclusions will not be easy for everyone to stomach: Pappe argues that the ethnic cleansing of Palestine continues today, and calls for the unconditional return of all Palestinian refugees and an end to the Israeli occupation. Without question, Pappe's account will provoke ire from many readers; importantly, it will spark discussion as well