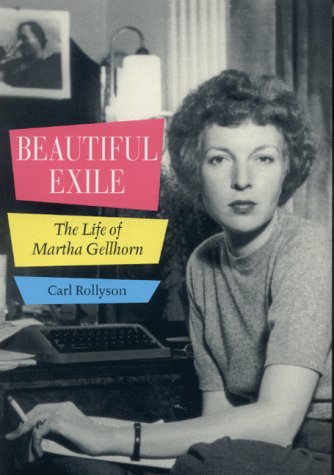 In her almost 90 years, Martha Gellhorn achieved a great deal—she reported on the Depression, the Spanish Civil War, the North African campaign, the Nuremberg trials. She was on the beach at Normandy in the early days of the invasion. In her 70s, she was reporting from El Salvador, Nicaragua and Cuba. She wrote several accomplished novels and remained faithful to her vision of social justice throughout a long life. How was she able to accomplish so much in fields that were generally at best lukewarm to women? Rollyson thinks he has the answer—she was blonde, manipulative and slept her way to the front. She also wore trousers from Saks Fifth Avenue. She spent some eight years as Hemingway's lover and wife, a fact that, despite her best efforts, no one seems ever to have forgotten. Rollyson certainly hasn't, as the bulk of his rather brief, gossipy and ultimately reductive biography is devoted to that relationship. Perhaps the animus of the author (a professor of English at CUNY-Baruch College and biographer of Susan Sontag and other women writers) is explained by Gellhorn's successful lawsuit that forced him to retract portions of his first biography of her (), published in 1990. Now that Gellhorn is safely dead (she died in 1998), she cannot sue, but this current work prompted Gellhorn's family and friends to come vigorously and publicly to her defense when it appeared last year in England. An official biography by Caroline Moorhead is reportedly in the works; readers interested in Gellhorn might do well to wait for it. 16 pages of b&w photos.