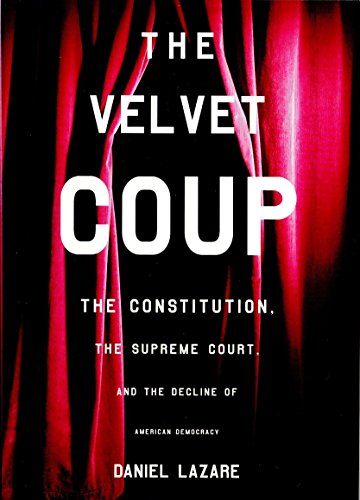 THE VELVET COUP: The Constitution, the Supreme Court, and the Decline of American Democracy

Where Bugliosi () and Dershowitz () have indicted the Supreme Court for subverting the Constitution in , political analyst Lazare () indicts the Constitution itself for subverting democracy. It bases government on the medieval, pre-democratic notion of law ruling over a people, rather than being a tool of popular self-government, to be changed as needed. Lazare links Americans' reverential attitude toward the Constitution to the early 1700s British Country opposition to the emerging parliamentary system. American arguments for independence and the Constitution drew on the Country opposition's veneration for Britain's ancient, unwritten constitution, which proved totally inadequate in meeting the challenges of 18th-century modernization. As a thinly populated backwater, America (unlike Britain) could get along by reincarnating ancient principles of divided power and limited government, complete with powerful minority vetoes on various levels. Lazare moves briskly from early modern England through the Constitutional Convention, the Civil War and into the present day. He portrays the period from Nixon onward as largely continuous, a protracted constitutional crisis resulting from the fact that limited, separate powers can lead to extreme, unforeseen reactions (Watergate, Iran-Contra, the Clinton impeachment, Bush v. Gore) as well as long-term stability. He concludes by arguing the possibility and necessity of escaping our constitutional bonds—if, for example, Gore were to run in 2004, pledging to abide by the popular vote and challenging Bush to do likewise. This is a fast-paced historical illumination of just how deeply the Constitution can be seen as hostile to democracy.