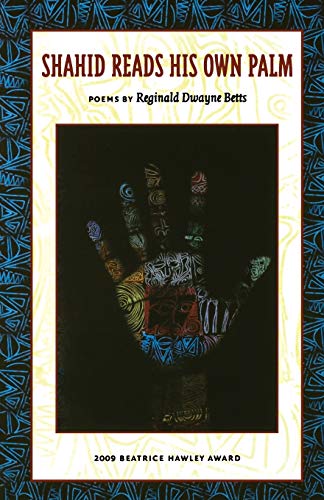 Shahid Reads His Own Palm

Betts's debut begins and ends with a ghazal. The strictness of this traditional Arabic form (a favorite of the late poet Agha Shahid Ali, to whom the title pays homage) is fitting—both to Betts's restrained though fierce talent, and to his autobiographical subject matter, introduced in the opening lines as “the blues of life in prison.” Confinement and restlessness, understanding and disbelief cycle through these clear, smart, brave, and often painful poems. The recurring motif of a hand on a gun surfaces throughout like a hallucination or a premonition, an image at once terribly real and frighteningly unreal. Sometimes it does the work of blunt narrative: “one night// a trigger tucked under/ my index like a/ spliff.” Elsewhere it veers into the surreal: “everyday the small muscles in my finger threaten to pull/ a trigger, slight and curved like my woman's eyelashes.” The unlikely word “mistletoe,” which appears more than once, exemplifies Betts's talent for surprising and emotionally resonant juxtapositions; he describes “small/ ruined cells where ten thousand// years of sentences/ beckon over heads & hearts,/ silent, a promise, like mistletoe.” Finally, it is not the omnipotence of silence—whether of hope or fear—but the power of writing that is this book's true subject: “Some men never pray at night in prison.// Blame me. Write another poem, a sad psalm./ Shahid, sing for the Gods, right in prison.”