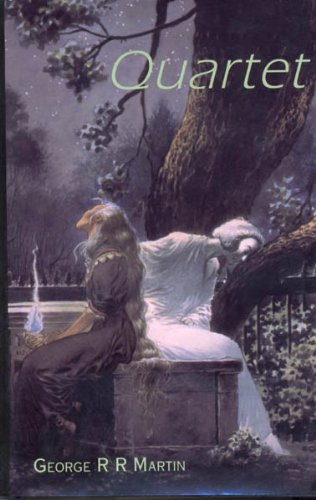 QUARTET: Four Tales from the Crossroads

Two novellas, a screenplay and a novel fragment—the last two previously unpublished—showcase the range of multiple Hugo and Nebula winner Martin (the Song of Fire and Ice trilogy). , the first 100 or so pages of an ambitious novel, follows three journalists in New York in the early 1890s as they cover a big crime story: the murder of the prostitute known as Old Shakespeare. Meticulously researched, sprawling and based on a real murder, it stunningly evokes place and time, but its leisurely pace means all too little happens. In "Skin Trade," it's up to asthmatic lycanthrope Willie and his pal Randi to find out who's killing werewolves and removing their skins, but plots within plots collide, leading to a bloody and confusing ending. In , a never-produced, laugh-out-loud funny sci-fi police procedural, stolen weapons, a dead alien dignitary and an insane alien conspire to keep the cops in a futuristic Chicago busy. The closing fantasy novella, "Blood of the Dragon," the best of the four, tells a taut and moving coming-of-age story about a young princess sold by her brother into marriage to a warlord. Although different in tone, content and genre, all the stories have in common an unerring eye for the human condition and the kind of grand scope and large-scale world-building that make for compulsive page turning.