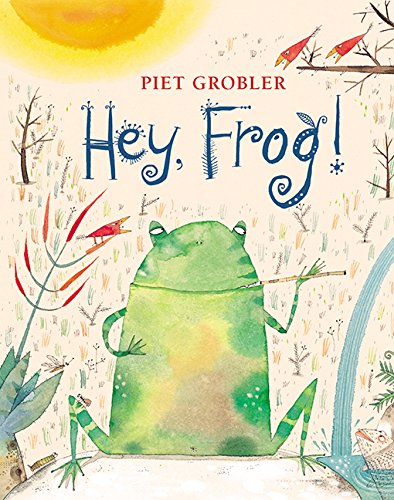 In this peaceable folktale, first published in the Netherlands, South African author Grobler depicts a friendly African savanna where a lion and leopard frolic with a hare, antelope and zebra. A greedy Frog drinks all the water with long "Sluuurrrps" through a bamboo straw, draining a puddle, pond and river. "He even swallowed the big blue lake." Newly homeless fish, chattering birds of all sizes, an annoyed green snake and other thirsty creatures growl, "Hey, Frog! Unzip those lips before you pop!" But the contented glutton will not open his mouth to let the water out, even though predators threaten him ("Crocodile told Frog a tall tale about a crocodile who ate dozens of frogs") and Crow "squawk[s] insults" at him in hopes he will reply. When all the violent means fail, five grinning gray eels emerge from the mud to tickle Frog, whose laughter releases the water in a brilliant blue spray. Grobler's ink-and-watercolor images, printed on pale beige, evoke a drought-prone landscape, and his primitivist petroglyphs of bugs, birds, tortoises and fish recall the stylized paintings of Paul Klee. He proposes a funny, creative solution to conflict in which no one is harmed, not even the unfortunate fly with which Chameleon vainly tempts Frog. This disarming book implies that a gentle approach can succeed, even in the most aggravating situations. Ages 2-6.