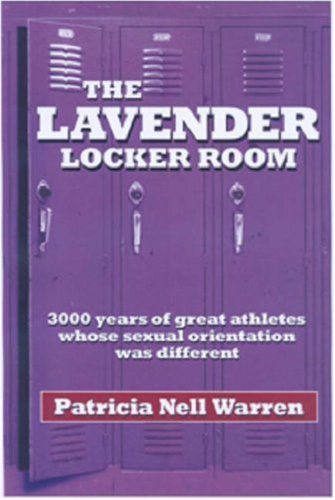 The Lavender Locker Room: 3000 Years of Great Athletes Whose Sexual Orientation was Different

Speculating about who's gay and who isn't has long been a pastime of gossip columnists, gay activists and sports fans. This chatty and informed, if inconclusive, three-millennium survey of queer sports figures holds some surprises, but they aren't contemporary baseball players or figure skating champions. Warren, who gained fame with her 1974 novel about an openly gay track star ( ), doesn't aim for inclusiveness, but she is iconoclastic. Beginning with Achilles and Patroclus, she jumps to Joan of Arc (renowned for her jousting ability), and then George Villiers, duke of Buckingham, one of Europe's first horse breeders when he wasn't dating James I. Twentieth-century figures include Big Bill Tilden, who reinvented men's tennis in 1919 before his career was ruined by a teenage male prostitute; aviator Amelia Earhart, tennis star Martina Navratilova and football player Dave Kopay. Warren essentially uses these sports heroes as an excuse for a series of witty, well-written meditations on such topics as same-sex love—or the lack of it—in movies like and ; on gladiators as sex symbols; the importance of fencing in the Harry Potter series; and the politics of hormone testing for women athletes.