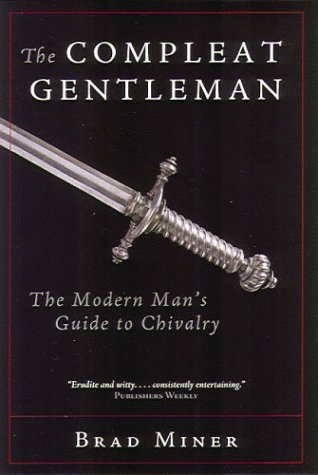 THE COMPLEAT GENTLEMAN: The Modern Man's Guide to Chivalry

According to Miner, an executive editor at Bookspan, former literary editor of and author of , a true gentleman is a master of the art of . The term, as used by the Renaissance writer Castiglione, refers to a way of life characterized by discretion and decorum, nonchalance and gracefulness—or, as Miner defines it, the cool exemplified by the men in first class on the who went bravely to their deaths in evening clothes. Underneath this unflappable quality, which says is not determined by birth or class, resides a man who is at once a warrior (a readiness to face battle for a just cause), lover (he lets a woman be what she wants to be) and monk (a man possessing true knowledge). In erudite and witty prose, Miner explores these three facets of his concept of the gentleman through an engaging survey of knighthood, warfare and courtship, "compleat" with the title's archaic spelling. Beyond a liberal sprinkling of quotes from the likes of G.K. Chesterton and Edmund Burke, the author provides a learned romp through the worlds of Eleanor of Aquitaine, the Cathars (a medieval heretical sect) and Benedictine monasticism. Miner's theories are consistently entertaining, and seem pitched toward a defense of his conservative view of contemporary politics, including his endorsement (in the book) of the Iraq war. In fact, Miner believes that a pacifist can be a gentleman only if he is also a saint, and, in gentlemanlike fashion, he acknowledges his guilt about his C.O. status during the Vietnam War. .