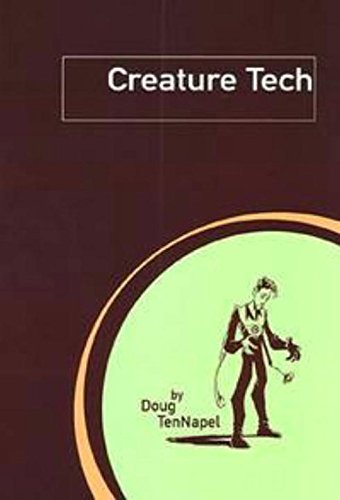 Set in Turlock, Calif., a town TenNapel grew up near, this book is a farcical, sci-fi good-versus-evil yarn that manages to explore theology, alienation and social acceptance in a small community. It's the story of the battle between the abrasive good-guy scientist Dr. Ong and the resurrected Dr. Jameson, a malevolent 19th-century occultist/mad scientist who sought to rule the world. Ong (a child science prodigy and Turlock native) returns to his hometown after being appointed to direct a research facility locals call Creature Tech. There, he opens a crate housing the Shroud of Turin. Things get complicated when the ghost of Jameson (he was killed during a fiendish experiment) steals the shroud, resurrects his own body and resumes trying to take over the world with the help of an army of conjured hellcats and a gigantic space eel. Ong pursues Jameson while simultaneously acquiring a symbiotic alien parasite (it's alive and acts like a kind of leech sidekick), falling in love with gloomy Katie and galvanizing a town of rednecks to fight Jameson's horde of demon hellcats. TenNapel's creativity and attention to detail fill this book with pleasant surprises and entertaining twists. His b&w drawings are dynamic, comic and often startlingly touching. The images of Katie, Ong's sweetie, emerging from her comic but awkward shell are powerful, and TenNapel deftly surveys the complexities of social alienation in a format primarily intended to be nonsensical. This work is slapstick funny, strangely sensitive and well worth reading.