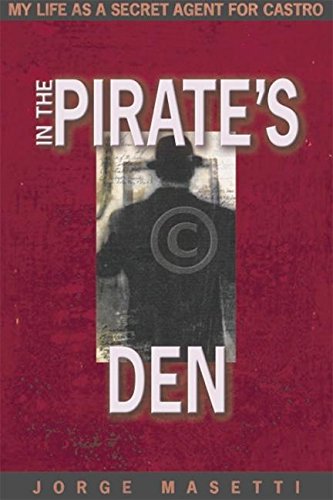 IN THE PIRATE'S DEN: My Life as a Secret Agent for Castro

Masetti spins a tale of progressive disillusionment with communism. He followed in the footsteps of his father, a Communist guerrilla who was killed when the author was seven. Cuban-born Masetti traces his involvement, beginning as a teenager in Argentina (his mother's native land), followed by stints in Colombia, Angola, Nicaragua and other revolutionary hot spots of the 1970s and '80s. Though the story of growing disgust with a bankrupt ideology has been told with more passion and insight elsewhere, Masetti does hit an emotional crescendo in the book's final pages, when he tells of the execution of his father-in-law, which led to his final break with Castro's Cuba. The book's strength lies elsewhere, in its description of the world of Communist spying and intrigue that Masetti experienced firsthand. He brings the reader into his initial training in guerrilla warfare and his later revolutionary actions. Despite the occasional triumph (some of his former comrades were involved in the murder of Nicaragua's Somoza during the Sandinista takeover in 1979), Masetti and his revolutionaries bungle a lot of attempts. As the years pass, these activities become simply illegal rather than revolutionary (robbing banks, for instance), and Masetti's devotion to his cause wanes. In fact, as he shows, his ideals fell victim to authoritarian secrecy—for which he holds Castro responsible—and intrigue and internecine bickering.