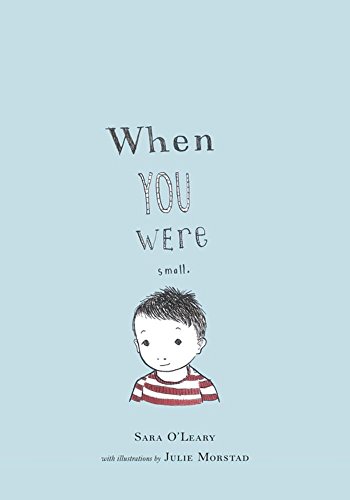 When You Were Small

O'Leary's debut features a robin's-egg blue cover and a retrospective title that recalls Milne's . Morstad's slightly clumsy ink drawings and drop caps, daintily tinted with watercolor and airy with negative space, update the work to somewhere nearer midcentury; with its large format and minimal color, this paper-over-board book could have been published in 1960 as easily as today, and homespun sketches of a wooden ruler and old-fashioned bathroom supplies only compound the anachronism. The narrative itself cultivates an appreciation for the absurd. Every night, a boy named Henry says to his father, "Tell me about when I was small." Deadpan recollections follow, each accompanied by a literal illustration of a smaller Henry. "When you were small we used to give you baths in the teapot," his father explains, and the image pictures a boy about to hop into a kettle, a stray sock draped over the handle. "When you were small you wore a thimble for a hat," says his father, and readers see a finger-size Henry, his eyes hidden under the brim of a thimble and a needle-sword hanging from his belt. As in , a sepia-tinted image of tiny Henry with his full-size parents sets the scale. This sequence posits a straight-faced game of hyperbole ("When you were small we took the toy castle out of the aquarium and you were king of it") that may well please children of many generations. Ages 3-6.