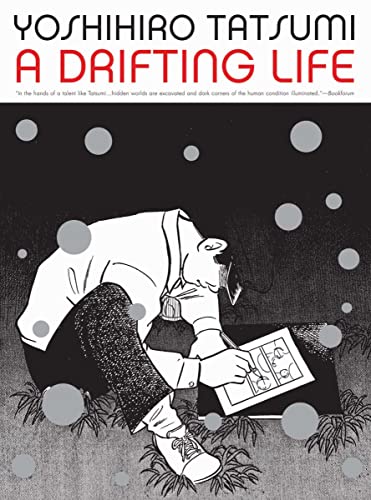 Tatsumi revolutionized manga in the 1950s, inventing gekiga—seething, slice-of-life stories about emotional crises. In this elephantine memoir (in which he barely disguises himself as “Hiroshi Katsumi”), he tells the story of his early years in the comics business, from his teenage obsession with entering postwar magazines’ reader-cartoon contests and poring over Osamu Tezuka’s comics to the brief late-’50s heyday of the gekiga workshop over which he presided. It’s also a history of Japan in that era, filtered through Tatsumi’s own experience—the sound of cicadas is a recurring symbol of portentousness—and packed with digressions on cartooning technique, the movies and prose fiction that inspired him, and his nervous flirtations with women; the passage of time is marked by illustrated factoids about each year’s headlines. Tatsumi’s visual technique is very much a product of an earlier generation—his characters’ faces are simple, broad caricatures—but the mastery he’s gained in half a century of cartooning comes through in his immaculate staging and composition. Readers curious about Japanese comics history may find the book’s wealth of detail fascinating; for the most part, though, Tatsumi’s vivid, graceful dramatizations of the period’s shifting business and creative alliances don’t quite justify the tedious, repetitive hybrid of bildungsroman and industry time line he’s created.