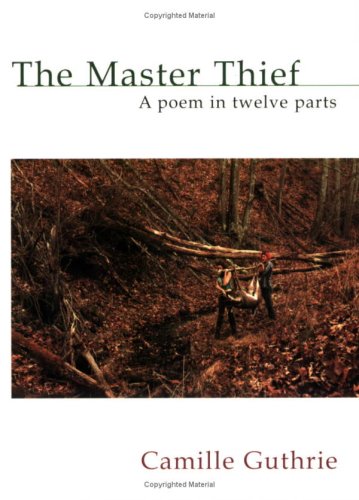 The Master Thief: A Poem in Twelve Parts

By turns gothic, romantic and reminiscent of Dickinson at her most riddling, this 12-part verse bildungsroman succeeds where so many recent archaically based girl-narratives fail. Unapologetically culling a loose patchwork of poetic and prosaic fragments from literary history, Guthrie's speakers are alternately aphoristic (""Fear's a calamity of translation""), petulant (""Betweenpie, I expected the loveliest brainchild ever"") and ironically exclamatory (""O monstrous act! I throw up a line and seize it right back""). Enigmatically named female characters--""She's Big With,"" ""The Marked Child,"" ""The Girl in the Machine""--are drawn from the preoccupations and diction of 17th-, 18th- and 19th-century pulp; each reads as a facet of a larger persona, namely The Master Thief. Each of 12 installments takes a signature form, including pseudo-pantoums, fragmentary dialogues, ironic pastorals and impassioned litanies. By cutting antediluvian lexicons with the tonal invectives of a 21st-century feminist, Guthrie furthers the text-combing tradition of Susan Howe, infusing it with a wry humor and irresistible panache: ""Give the lie/ my female evil,"" says ""Emilia"" in an aside, ""Come on,/ admit impediments, show the choice// Myself I forfeit/ to be parent's sweet counterfeit./ Above the bedroom door/ In red letter, read: FREE TODAY, TOMORROW PAY."" High seriousness, farce, and melodrama ensue, making this multivalent--or, more precisely, decidedly ambivalent--narrative richly rewarding, hilarious and heartbreaking. (Feb.) Forecast: Guthrie's brilliant poems on the art of Louise Bourgeois have been appearing steadily in magazines. This book, those poems and another set loosely based on the unicorn tapestries (excerpted in the recent ""American Poetry: States of the Art"" issue of Conjunctions) augur a promising career: ""my sentence read, the hatchet flashed,/ my two hands buried at the root.""
close
Details