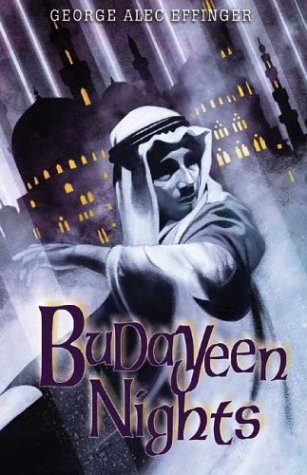 One of the founders of cyberpunk, Effinger (1947–2002) led a pain-filled life, but one would never know of his suffering from the tales in this brilliant collection, full as they are of antic humor and atmospheric inventiveness. All nine selections—seven stories, the first portion of an uncompleted novel and a story fragment—are set in his marvelously realized, imaginary Muslim city of Budayeen (inspired by New Orleans's seedy French Quarter), also the setting for three novels (, etc.). Marîd Audran, the chief protagonist in these stories, like everyone else in the 22nd century, wears brain-implant plugs, enabling him to snap in and experience "moddies," for pleasure or otherwise. The former is supplied by Honey Pilar, sex goddess of "Slow, Slow Burn," whose super-provocative moddies are shared, with or without partners, by millions. In "Marîd Throws a Party," the projected opening of , a fourth Budayeen novel, Marîd is disconcerted when his adoptive grandfather, the powerful Friedlander Bey, announces he's giving him the unwelcome gift of a new set of implants. In "King of the Cyber Rifles," these implants are used for war purposes. Technology tends to play a smaller role in Effinger's finest shorter works, such as Nebula and Hugo winner "Schrodinger's Kitten," a story of multiple worlds, and "The City on the Sand," set in the Budayeen but flavored with European weltschmerz. Days before his death, Effinger began the final story, "The Plastic Pasha," barely an excerpt, but pungent and alive.