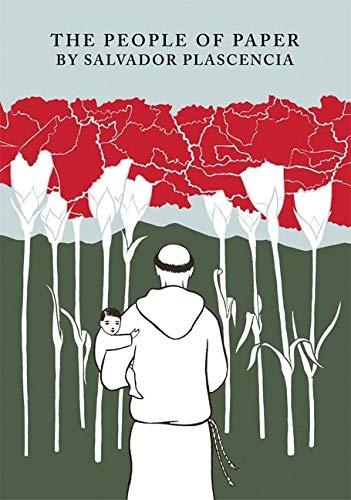 The People of Paper

Plascencia's mannered but moving debut begins with an allegory for art and the loss that drives it: a butcher guts a boy's cat; the boy constructs paper organs for the feline, who is revivified; the boy thus becomes the world's first origami surgeon. Though Plascencia's book sometimes seems to take the form of an autobiographical attempt to come to terms with a lost love, little of this experimental work—a mischievous mix of García Márquez magical realism and typographical tricks—is grounded in reality. Early on we meet a "Baby Nostradamus" and a Catholic saint disguised as a wrestler while following the enuretic Fernando de la Fe and his lime-addicted daughter from Mexico to California. Fernando—whose wife, tired of waking in pools of piss, has left him—settles east of L.A. in El Monte. He gathers a gang of carnation pickers to wage a quixotic war against the planet Saturn and, in a Borges-like discovery, Saturn turns out to be Salvador Plascencia. Over a dozen characters narrate the story while fighting like Lilliputians to emancipate themselves from Plascencia's tyrannical authorial control. Playful and cheeky, the book is also violent and macabre: masochists burn themselves; a man bleeds horribly after performing cunnilingus on a woman made of paper. Plascencia's virtuosic first novel is explosively unreal, but bares human truths with devastating accuracy.