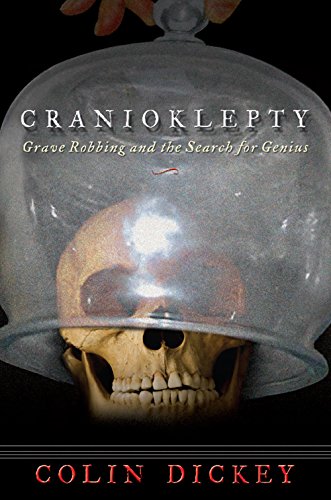 Cranioklepty: Grave Robbing and the Search for Genius

The word “skullduggery” finds a new meaning in Dickey's well-vetted account of those obsessed with owning the skulls of the highly talented and famous. Fiction and nonfiction writer Dickey (co-editor of ) takes the reader back to the plucky grave robbers who stole the craniums of famed composers Haydn and Beethoven, Swedish mystic Emanuel Swedenborg, artist Francisco Goya, the English doctor and philosopher Sir Thomas Browne and others to sell, study or put on public display. The skull obsession was triggered by the infamous “Gall system,” created in the late 18th century by Franz Joseph Gall, who theorized that the bumps and dents of the skull could provide a measure of intelligence. The author not only describes the profitable trade of grave robbing, but the chemical technique of cleaning a skull, the patronage of medical schools and the complex scientific debates about whether the size and shape of skulls and brains tell us anything about human intelligence or personality. Blending science with historical drama, Dickey's book illuminates the mystery and controversy of a bizarre tradition throughout the ages.