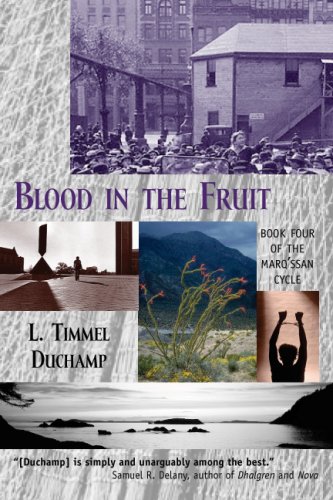 Blood in the Fruit: Book Four of the Marq’ssan Cycle

Originally written in the mid-’80s and revised in 1996, this fourth installment of the idea-packed near-future dystopian Marq’ssan Cycle (after 2007’s ) echoes classic feminist anxieties about humanity’s future. It also demands a hefty knowledge of the previous works in the cycle. First, the violence-hating alien Marq’ssan shut down Earth’s technology, asking specifically for women to represent the various nations. Then the women-run Pacific Northwest Free Zone tried to stave off the draconian measures of the male-dominated U.S. Executive. Now, in 2086, amazonian Liz Weatherall, the sworn enemy of once and future Executive leader Robert Sedgwick, wants to create her own savage antimale regime. Duchamp’s writing exudes hatred of men, which she attempts to justify with scenes of sexual torture and a perverse father-daughter relationship. Not for the squeamish, this ferocious vision of male depravity and female will to power demonstrates how corrupting the thirst for domination can be—for both sexes.