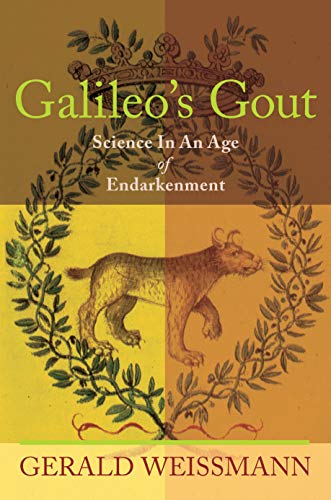 Galileo's Gout: Science in an Age of Endarkenment

Weissmann, a research professor at NYU's School of Medicine, is concerned about what he calls the coming endarkenment, which he contrasts with the Enlightenment, and warns that our lack of scientific understanding is beginning to cause serious problems for society. For instance, he sees as emblematic of the endarkenment the displacement of science by religious doctrine in the evolution/creationism controversy and the federal government's efforts to do rigorous scientific studies of faith-based alternative medical treatments. As in other books, such as and , Weissmann offers brief chapters (most previously published in a variety of venues), which allows him to touch on many topics but at the expense of depth. Although Weissmann models his work after that of his mentor, Lewis Thomas, his writing is not as poetic; his ideas, however, are every bit as important. Two chapters, one on Thomas and one on Thomas's mentor, Hans Zinsser, are particularly well done and serve as an intellectual family history for Weissmann. Like those two greats, Weissmann is a staunch defender of experimental science and of medical practitioners who take the time to listen to and learn from their patients, all of which he fears will be lost in the approaching endarkenment. B&w illus.