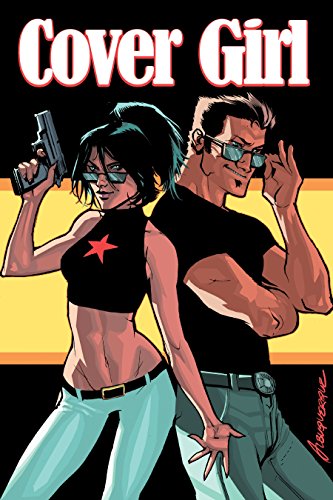 When struggling Hollywood actor Alex Martin rescues a woman from a mysterious, almost fatal accident, he becomes an instant star—and also finds that a murderous cabal is out to kill him, too. His studio assigns some high-powered bodyguards, most notably this book's title character: wiseacre Rachel Dodd, who looks like arm candy and shoots like James Bond. If you imagine that the two of them will despise each other at first, then bond through a series of action-comedy escapades (in the course of which Rachel will wear skimpy outfits and fire big guns) until romance blossoms between them, you are almost entirely right. It's unabashedly an odd-couple comedy pasted onto an action flick, and self-aware about it. Still, Cosby and Church get in some clever jabs at the movie business and its cults of personality, and the frothy script has the sort of densely packed badinage beloved by readers of Church's online comic strip, the Rack. Santolouco's artwork is at the cruder, cartoonier end of the generic mainstream continuum—he sometimes favors dramatic angles to make up for his dodgy grasp of anatomy—but the story zips along as amusingly as the B-movies it parodies and pastiches.