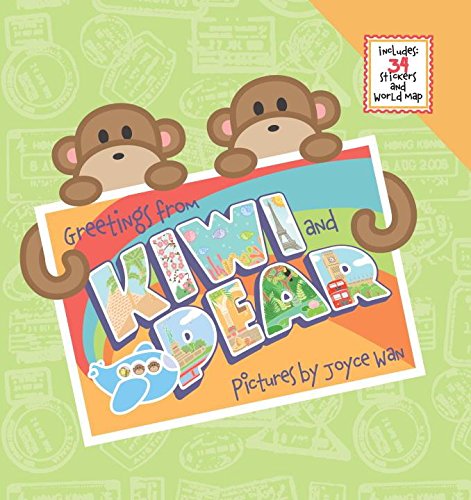 Greetings from Kiwi and Pear

Complete with a fold-out map to track their progress and stickers that resemble stamps, this compact book follows two cute, affectionate monkeys (rendered in a vaguely manga style with chunky outlines) named Kiwi and Pear as they jet around the world. Postcards with rhyming text explain how the pair have spent their time, followed by fold-out illustrations of their activities: “We paddle down the Amazon,/ then hike the Andes with backpacks on” (the fold-out shows Kiwi and Pear leading a friendly llama). In Paris, sporting red berets, they “bike for an hour,” then “climb the Eiffel Tower.” Their final voyage blasts them into outer space on a rocket before they return home. A sweet and rather cuddly introduction to some noteworthy global locations. Ages 4–8.