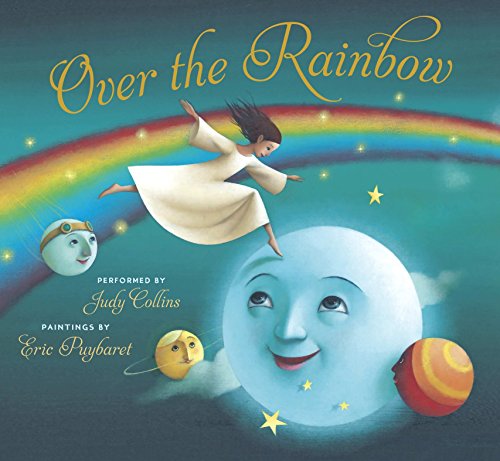 Puybaret ( ) offers a beguilingly surreal interpretation of Harburg’s lyrics to the titular song, written for . Leading into the song’s familiar chorus is a lesser-known verse describing the world as a “hopeless jumble,” portrayed in Puybaret’s acrylic paintings as a rain-soaked, windblown cityscape. Giving a nod to the film, the setting shifts to a farm, where a rainbow appears at a girl’s window to lead her to “a place behind the sun, just a step beyond the rain.” There, cloud castles smile and wave, and planets and stars look kindly on the girl, as she gracefully floats alongside exotic, long-necked bluebirds. When she returns to her barnlike home, the creatures and celestial objects from her magical journey remain, turning the wistful tenor of the closing lines (“Why, oh, why can’t I?”) into a statement of defiance that speaks to the power of imagination. Creatively meshing folk-art flourishes with an ethereal sensibility, the illustrations well match the fantasy of the lyrics. Grammy-winner Judy Collins sings the title track and two other songs on an accompanying CD. Ages 4–8.