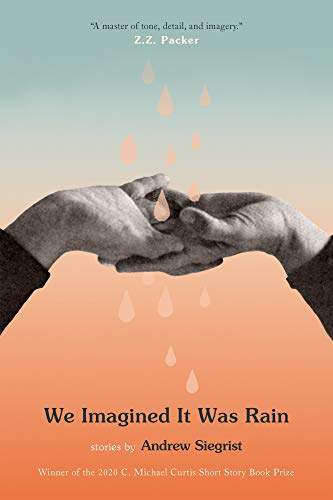 We Imagined It Was Rain

In his debut collection of loosely connected stories set mostly in Tennessee, some of which draw on local folklore, Siegrist shows a remarkable ability to evoke the missing pieces in his characters’ lives. As the title suggests, water, in all its variations, is central to these tales of lost love, memory, and transformation. In the haunting “Heirloom,” Cole, who has lost his son and moved to a cabin in the woods, meets Tia, a young woman who tells him about a coffin full of water buried in the hills. At the end of the story, she lures him into the dark forest where he can smell the “heavy scent of salt from a buried sea.” Rae, a young woman in “Beneath Dark Water,” lives in fear of her physically abusive boyfriend, Darcy, a heavy drinker. In “Shouting Down the Preacher,” a man has lost his wife and his calling to infidelity, and blames himself when his former church floods. Even in the midst of the author’s piercing look into the human heart, however, there is humor, albeit dark. “Elephants” and “How to Hang a Circus Elephant” are connected stories about Mary, a rogue elephant who has to be shot, hanged, and buried. Her tusks, rumored to be visible aboveground, give the town an odd notoriety. With their universal themes, Siegrist’s folkloric stories have plenty of appeal. (Oct.)
close
Details