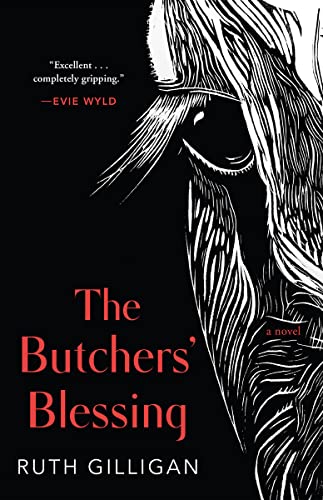 In Gilligan’s remarkable latest (after Nine Folds Make a Paper Swan), a group of eight men known as the Butchers slaughter and dress cattle on a series of farms in Ireland, practicing ancient rituals meant to ward off a curse. As mad cow disease upends the British beef industry in 1996, American photographer Ronan Monks shoots a photo of a dead man hanging from a meat hook driven through his feet in County Monaghan, where Monks has come to photograph life in the Irish border counties. The man in Monks’s photo is a Butcher, but the circumstances of his death remain mysterious for much of the novel, which flashes forward to 2018, with Monks planning to show the photo for the first time. The bulk of the narrative uses four viewpoints: Grá, lonely after her husband leaves for the Butchers’ long annual journey, is attracted to Monks. Grá’s daughter, Úna, reveres the Butcher heritage and hopes to become the first female Butcher. She practices their rituals and knife skills while her classmates’ bullying tempts her to violence. Dairy farmer Fionn joins a risky cattle smuggling scheme in order to pay for treatments at a clinic he believes could cure his wife’s brain cancer. Fionn’s son, Davey, hopes his college entrance exams will qualify him to study in Dublin. As the desperate protagonists discover how far they will go for their desires, their stories illuminate the power of myth, the tensions between past and present, and the weight of family expectations. With beautifully crafted prose, suspenseful plotting, and imaginative scope, Gilligan’s off to a blazing start. (Nov.)

Correction: An earlier version of this review incorrectly stated this was the author's first novel.