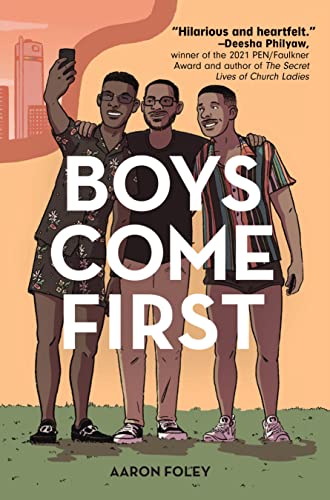 Foley’s sparkling debut novel (after the guidebook How to Live in Detroit Without Being a Jackass) follows a trio of Black gay male friends in Detroit as they grapple with love, work, and gentrification. Dominick Gibson returns home to Motor City after two setbacks in the Big Apple—losing his job and finding his boyfriend cheating on him. He reconnects with his best friend Troy Clements, a teacher, and meets Troy’s bestie, Remy Patton, a real estate agent. As Dominick reacquaints himself with his native city, the guys observe the differences between “Old and New Detroit,” talk about code-switching, and wonder if they can have healthy, stable relationships. Troy’s boyfriend, Roderick, is abusive, and Remy is imagining a future with Roland, his long-distance “situationship.” In contrast, Dominick has a series of awkward, unsatisfying hookups. Meanwhile, a real estate deal Remy is involved with that would result in Troy’s school being torn down causes a rift between the friends. But it’s Remy’s soul-searching that takes center stage, as he weighs his desire for a meaningful relationship with a need for self-fulfillment, all the while carrying the burdens of his sexual and racial identity. Foley’s love for his city and his engaging characters shines through, and his novel is funny, naughty, and comforting. This auspicious debut will leave readers eager for more. (May)
close
Details