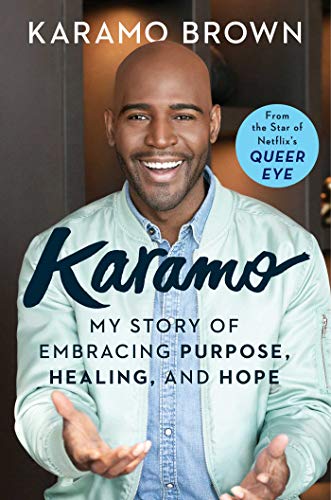 Karamo: My Story of Embracing Purpose, Healing, and Hope

In this often passionate, insightful memoir, Brown, known for his reality TV roles on The Real World and Queer Eye, shines a revealing light on addiction, race, and desire. Born in 1980 in Houston, Tex., he was the only son of a Jamaican-Cuban immigrant family and proud of his Rastafarian father, who gave him the Swahili name Karamo, meaning “educated rebel.” Sometimes the name caused Brown embarrassment, but it fostered an inner strength in grade school, he writes, and as an undergraduate at Florida A&M, a historically black college. His pioneering appearance as the first openly gay black man on MTV’s The Real World put all of his flaws on view, and led him to confront his drug use, excessive partying, drinking, and depression. Brown’s role as Queer Eye’s fiery culture expert allowed him to comment openly about racism and sexual stereotypes as he found happiness as the single father of two boys and, later, in a committed relationship. “We must find ways to move the needle on success and love,” Brown notes in the clear-eyed writing and encouraging tone that permeates his narrative. This is a powerful story of a young, gay black man’s fight to gain self-empowerment and healing. (Mar.)
close
Details