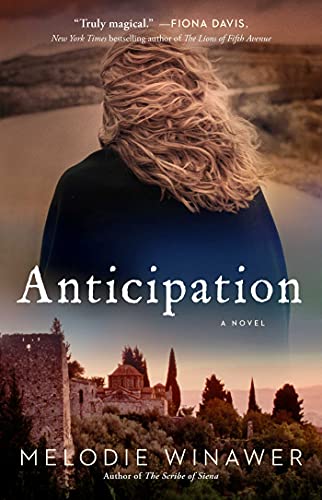 Winawer (The Scribe of Sienna) enthralls with this unique combination of history, romance, and the supernatural. In 2015, Helen Adler, a research scientist living in New York City with her nine-year-old son, Alexander, copes with single parenthood a year after the drowning death of her husband, Oliver. Alexander is obsessed with Greek mythology, and Helen agrees to his request to vacation in Greece. There, Helen and Alexander explore the ruins of Mystras, and Helen is drawn to their mysterious guide, Elias Orologas, who, unbeknownst to her, was originally born in 1237 and has lived, died, and been reborn since then because his mother pledged him to the service of the church of Profitis Ilias to save his life. While visiting a town near ancient Sparta, Helen and Alexander recognize Pierre Lusignan, a pompous professor they’d seen on television talking about Huntington’s disease, the primary subject of Helen’s work. Alexander has a bad feeling about him, which is borne out by a series of flashbacks to the 13th century involving Pierre’s ancestors’ attempts to steal Elias’s blood, which they believed would cure the family’s inherited disease. Not long after Elias meets Pierre, who develops some highly unorthodox plans for blood research, Elias is in mortal danger. Winawer draws on her experience as a scientist to make the research aspects of the plot feel real, while expertly switching between the present day and the various time periods of Elias’s lives. Readers will be riveted from the first page. Agent: Marly Rusoff, Marly Rusoff Agency. (Nov.)
close
Details