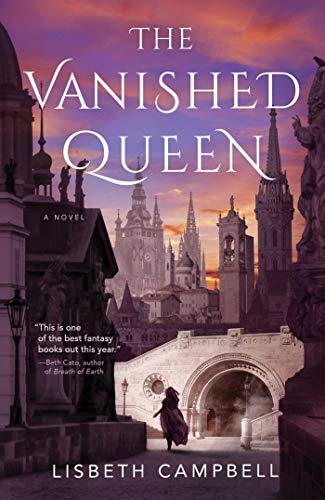 Campbell skillfully balances action and introspection as rebellion rises against an oppressive regime in this promising epic fantasy debut. The city of Karegg is under the control of the brutal King Karolje. When college student Anza breaks into one of the libraries that Karolje has ordered closed, she discovers the journal of Mirantha, the former queen who Karolje had disappeared. After Anza’s father is executed for unknown reasons, Anza joins the resistance movement against Karolje, inspired, in part, by reading Mirantha’s tale. Anza is arrested for her involvement with the movement and interrogated by Esvar, one of Karolje’s sons, who, along with his brother, Tevin, plots to overthrow his father, but fears a lack of support among the nobility. Anza is released, and she, Esvar, and Sparrow, the mysterious leader of the resistance, come together to put an end to Karolje’s tyranny. By situating Anza within a larger resistance movement, Campbell steers refreshingly clear of typical “chosen one” tropes, instead illuminating the collective effort required for revolution while drawing pointed parallels to the current U.S. political climate. This competent, character-driven debut may not be splashy, but it is solid. Agent: Bridget Smith, Dunham Literary. (Aug.)
close
Details

Feed Them Silence
Feed Them Silence
Lee Mandelo
This impressive novella from Mandelo (Summer Sons) probes the bounds of human empathy in the face of ecological crisis. Sean, a middle-aged researcher in the year 2031, embarks Continue reading »

Dogs of War
Dogs of War
Adrian Tchaikovsky
Arthur C. Clarke Award winner Tchaikovsky (Children of Time) takes readers inside the mind of a weaponized bioengineered animal in this imaginative triumph, the first in a Continue reading »

Knot of Shadows
Knot of Shadows
Lois McMaster Bujold
Temple sorcerer Penric and demon Desdemona return in this page-turner fantasy mystery from Bujold, the 11th in the series (after The Assassins of Thasalon) and possibly the best Continue reading »