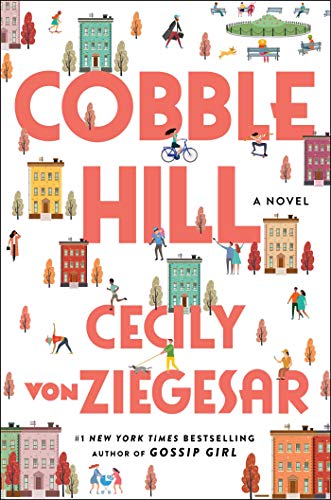 This amusing romp from von Ziegesar (the Gossip Girl series) centers on an ensemble cast of self-aware, alienated couples in the Brooklyn neighborhood of Cobble Hill. Roy Clarke, famed British novelist of the cult hit Rainbow series, functions as the book’s center, arriving in Cobble Hill at the insistence of his critical wife, Wendy, who had hoped moving from London to New York City to take the features editor job at a fashion magazine would give her life a new direction. Roy, along with Wendy and their awkward adolescent daughter, Shy, hoped to “slip into Brooklyn and discover it quietly, be discovered by it quietly,” and in Roy’s efforts to overcome his six-year writing drought, he finds inspiration in his new neighborhood’s oddball residents: lonely Tupper Paulsen, a commercially successful but superficial artist; Tupper’s eccentric, seldom-seen performance artist wife, Elizabeth; sexy, dimpled Peaches, an English-major dropout and public school nurse with unrealized drummer dreams; Peaches’s awkward teenage son, Liam, who is self-diagnosed with Asperger’s and in love with Shy; and Stuart Little, a former rock star determined to be a good dad and a good husband to his wife, Mandy. The roiling tensions within and between families break into the open during the Bonfire Night party Roy throws for the neighborhood. Von Ziegesar’s quirky novel of lovable misfits will appeal to fans of Tom Perrotta. [em](Oct.) [/em]
close
Details