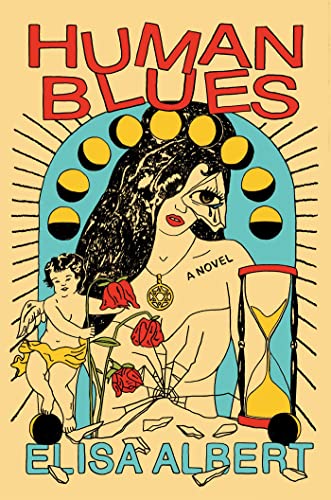 Ascendant singer-songwriter Aviva Rosner navigates a bowdlerizing music industry, a judgmental Jewish family, and the Faustian prospect of “industrial fertility” in this bighearted and riotously funny performance from Albert (After Birth). To do so, Aviva, “in the green half of her thirties,” draws on the rebellious spirit of Amy Winehouse, who, according to Aviva’s narration, spent her all too short career “giving zero fucks.” Albert convinces the reader of Aviva’s sparkle by showing listeners’ reactions to her in low-key scenes, like an open mic set in Albany, N.Y., where Aviva lives with her teacher husband, Sam. Story lines develop around Aviva’s crush on another musician whose path she expects to cross while on tour, and with whom she continuously flirts despite her devotion to hunky “townie” Sam; and a series of DMs with Winehouse’s Mum—but what drives the unrelenting narrative is Aviva’s intense and frustrated desire for a child. She and Sam have been “hoping,” but not “trying,” the difference being she’s not doing IVF. Her unapologetic feelings about the latter, which she views as an expression of entitlement by wealthy, straight, cisgendered women, and as a physical violation, show up on her new folk-punk record, Womb Service, which the diehards love, but her manager and the internet aren’t so sure about, especially after taking in her incendiary tweets (“hey cuntrags, what personal struggle of vital importance are you ignoring whilst you sit on this site jerking off your diseased ego?”). Meanwhile, her mother insists she do whatever it takes to have a baby. The depth of feeling, range of ideas, and spiky provocations amount to a Bellow-worthy wave of blistering prose. By the end, it pummels the reader into submission. (July)
close
Details