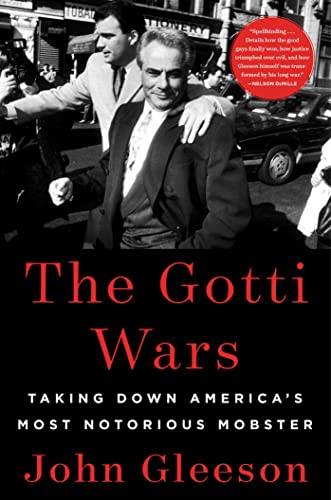 The Gotti Wars: Taking Down America’s Most Notorious Mobster

In this exceptional debut, former federal prosecutor Gleeson chronicles his efforts to bring Gambino family crime boss John Gotti to justice. Gotti had been an obscure Mafioso before the 1984 murder in midtown Manhattan of his predecessor, Paul Castellano. Gleeson, a junior Brooklyn Assistant United States Attorney who was a crucial part of the team that tried Gotti in 1987 for racketeering, was devastated by his acquittal. Gleeson learned years later that the jury had been tampered with. In 1992, he got another shot at his target in a high-stakes case that followed two other acquittals of Gotti on state charges and included charges that Gotti had ordered Castellano’s murder. The prosecution had been built on extensive electronic surveillance, but got a last-minute boost when Sammy Gravano, Gotti’s underboss, agreed to testify against Gotti. Gotti’s conviction at that trial was a major blow to the mob. While the general contours of the investigations have been covered elsewhere, Gleeson pulls back the curtain to reveal intriguing information previously not made public, including his daring and risky choice not to inform his superiors of his negotiations with Gravano, out of fear that the U.S. Attorney might accidentally disclose that sensitive development. This is a must-read for anyone interested in organized crime. Agent: Kathy Robbins, Robbins Office. (May)