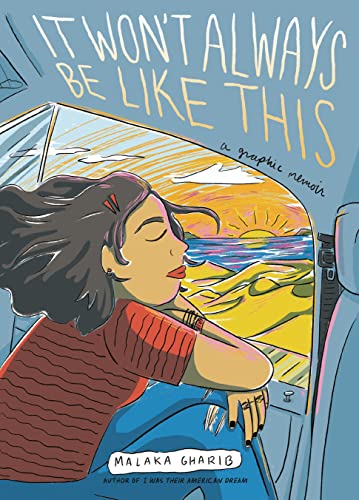 Gharib’s empathetic second graphic memoir, a follow-up to I Was Their American Dream, covers culture clashes, family clashes, and identity mash-ups, set in the late ’90s to the early 2000s. In her tween years, Malaka—who normally lives with her Filipina mother in Los Angeles—spends summers in Egypt with her father and stepmother, Hala. She and Hala, who is initially “more like a big sister,” enjoy each other’s company, but Malaka misses her dad when he works long hours and feels like a third wheel once her stepsiblings are born. She doesn’t speak much Arabic, which makes it hard to bond with the relatives in her extended family. As she finds her American identity in ska music, she resents Hala’s growing religiosity and her father’s notions of what a “young lady” should be. “Dad, I don’t know if you noticed, but I’m into subculture,” Malaka scolds. But as Malaka grows, so too does her grace toward her father and for Hala, who has more going on beneath her abaya than she lets on, as Gharib disrupts and complicates cultural stereotypes. Gharib’s drawings are freehanded and energetic, with brightly detailed marketplaces, beach scenes, and cityscapes, peppered with excerpts from Gharib’s actual adolescent diaries. This work will resonate with any comics memoir fan who felt like a fish out of water growing up, and promises teen crossover appeal. (Sept.)
close
Details

Slash Them All
Slash Them All
Antoine Maillard
A remorseless killer stalks a beach town in Maillard’s spectacular debut. The story opens in dramatic fashion when a man with obscured eyes bludgeons two girls to death with a Continue reading »