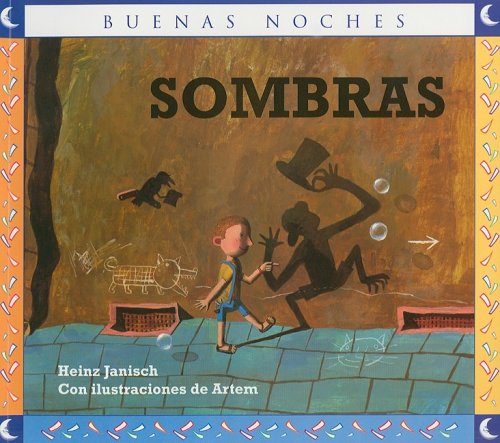 PreSchool-Gr2-Two music-loving characters come together through the intervention of a witch in this unusual story. Tiny Diminuto lives in a piano and is constantly surrounded by music. In his portion of this flip book, he follows sounds that lead to a machine that magically transports him to another land. Saltatriz's story, which starts on the opposite side of the book, tells readers about how this seller of songs was captured by a witch and brought to the location where she will eventually meet Diminuto. Both tales are told through the use of narrative poetry, with one starting from one side of the book, and the other from the opposite side. The stories join together in the middle, where the two characters meet and bring about a final resolution. The rich, poetic vocabulary may be difficult for younger readers to understand, but the general plot should be understood by all, regardless of age. The equally poetic and fanciful line drawings complement the story by using color to draw readers' attention to its most essential elements, hence driving the plot forward. A good additional purchase for libraries and bookstores. Reviewed by Bianca Elliott, Lansing High School, Lansing, Kansas - Cr\xEDticas, 10/15/08 Sombras. (Shadows)Grade 1-3-On a summer day, everyone in Sergio's family is sleeping, lulled by the heat. Sergio, however, decides to go for a walk around the city. As he leaves the house, he notices that the shadows of his snoozing family are anything but somnolent-in fact, they are playing soccer! The shadows outside also look different from those who cast them; an old man slumbers on a bench as his shadow follows a bird in flight; a man and woman pass each other on the sidewalk exchanging timid glances, but Sergio can see their shadows embracing; a little girl speeding by on her bike casts a shadow distinctly reminiscent of Amelia Earhart on her airplane, and so it goes. By the time Sergio returns home, he has brought his own distinct shadow with him. The still afternoon, sleepy town, and imaginative child are all mesmerizing and reminiscent of Anthony Brown's Changes (Knopf, 1990). The acrylic cartoon illustrations, done in a palette that is at once somber and sun-drenched, perfectly captures the mood of contemplative strangeness that dominates the book. A great pattern book for writing, as it carries the potential to enthrall readers in the early primary grades. An excellent choice for schools and public libraries serving Latino populations, as well as for bookstores. Reviewed by Ann Welton, Grant Center for the Expressive Arts, Tacoma, WA-Cr\xEDticas, 10/15/08(Xela's Dream)Honrado, Alexandre. Grade 3-4-Miguel doesn't like books, but while staying at his grandparents' house, his grandfather offers him something to read, and the boy reluctantly takes it. Soon, Miguel finds himself becoming a part of the book's story. There, he meets Xela, a strange boy from a magical world. In that fantastic place, Miguel encounters all sorts of strange and fabulous creatures, such as deer with colorful horns, gnomes, fish with human heads, and a villainous parrot with wings like a swan and a face like a clown. Miguel travels over a river made of crystal in a bathtub with lion's feet, visits the desert of sugar, and flies over a volcano made of candy, all in efforts to free his new friends from the evil parrot that oppresses them. Torr\xE3o's illustrations offer readers a new dimension of extraordinary creatures. Her technique varies from simple pen and ink drawings, to pastel collages that illustrate the most meaningful passages of the story. The end of the tale finds Miguel uncertain of whether his adventures were real, or part of a dream, which reinforces the story's underlying message that books can help readers discover their own creativity and develop their imaginations. Recommended for all public and elementary libraries. Reviewed by Veronica Covington, Univ. of Texas, Austin Cr\xEDticas, 10/15/08
close
Details