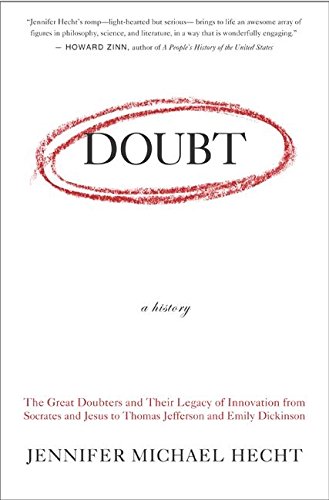 Cited midway through this magisterial book by Hecht (), the Zen maxim "Great Doubt: great awakening. Little Doubt: little awakening. No Doubt: no awakening" reveals that skepticism is the sine qua non of reflection, and discloses the centrality that doubt and disbelief have played in fueling intellectual discovery. Most scholarship focuses on the belief systems that have defined religious history while leaving doubters burnt along the wayside. Hecht's poetical prose beautifully dramatizes the struggle between belief and denial, in terms of historical currents and individual wrestlings with the angel. Doubt is revealed to be the subtle stirring that has precipitated many of the more widely remembered innovations in politics, religion and science, such as medieval Jewish philosopher Gersonides's doubt of Ptolemaic cosmology 200–300 years before Copernicus, Kepler or Galileo. The breadth of this work is stunning in its coverage of nearly all extant written history. Hecht's exegesis traces doubt's meandering path from the fragments of pre-Socratics and early religious heretics in Asia, carefully elucidating the evolution of Hinduism, Jainism and Buddhism, through the intermingling of Eastern and Western religious and philosophical thought in the Middle Ages that is often left out of popular histories, to the preeminence of doubt in thrusting open the doors of modernity with the Cartesian "I am a thing... that doubts," . Writing with acute sensitivity, Hecht draws the reader toward personal reflection on some of the most timeless questions ever posed.