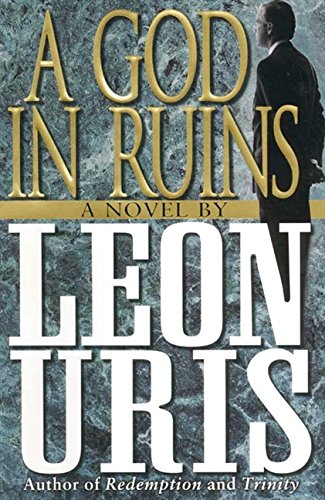 A God in Ruins

Veteran writer Uris (Exodus; Redemption) begins his 12th novel with a compelling premise: Quinn O'Connell is certain to become America's second Roman Catholic president, except that he discovers, a week before the 2008 election, that he was actually born Jewish. Adopted 60 years ago by a Catholic couple, and newly informed by his long-lost Jewish half-brother of his heritage, O'Connell now asks a difficult question: Is America ready to elect a Jewish president? This initial introduction of the issue of anti-Semitism seems promising. Uris obviously is aiming to put the religion of a world leader in perspective: what does it matter if he's at heart a good and honest man? But then he virtually ignores the theme for the next 300 pages. Even when the national reaction to O'Connell's identity results in epidemic violence against Jewish people across the country, an event compared to Kristallnacht, the national issue that gets the most play in O'Connell's presidential race is gun control. His opponent in the election is Republican incumbent Thornton Tomtree, whose administration is struggling to repair his reputation in the wake of violent national tragedies like the Four Corners Massacre, in which 400 Eagle Scouts and their troop leaders are killed in a catastrophic explosion set off by a drugged-out militia group. O'Connell goes up against the gun lobby and calls for repeal of the Second Amendment as part of his presidential campaign. This issue dominates the bulk of the novel, making the opening and closing sections feel like a cut-and-paste job on a totally different story. Years are dismissed in sentences and events are outlined instead of described. Gun lobbies, neo-Nazi militias and tensions between black and Jewish communities eventually get worked into the plot, as does O'Connell's family history, but Uris's apocalyptic tale is too stylistically scattered to generate much suspense. In fact, readers may think they are reading a miniseries teleplay that hasn't been fully fleshed out. Author tour; 15-city TV satellite tour. (June)
close
Details