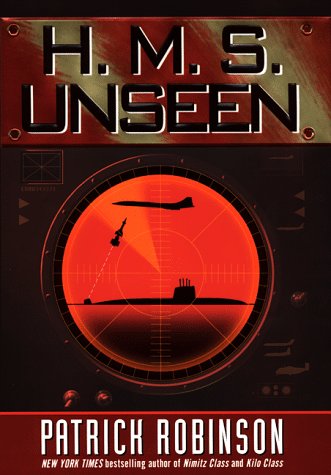 The third near-future naval techno-thriller from Robinson (Kilo Class; Nimitz Class) breaks neatly into two stories. The first is about a hijacked sub and its brief but effective reign of terror against American and European aircraft. Iraqi terrorist Benjamin Adnam, escaping death at the hands of his countrymen, travels to Iran and offers his services to the reigning Ayatollah, with plans for a twisted revenge. He will hijack a British submarine that is about to be sold to Brazil, fit it with a missile launcher and attack American aircraft in such a way that Iraq, not Iran, will be blamed. When the British sub vanishes, and even before three planes are shot out of the sky (including one carrying the American vice president), Adnam's American nemesis, Admiral Arnold Morgan, discerns the terrorist's hand behind events. But no manhunt follows, as Robinson instead focuses on Adnam's inner turmoil and his fate as a traitor who's been rejected by his mother country and discarded by his surrogate home. Robinson uses this departure from formulaic plotting to deepen Adnam's character, from cold super-terrorist to lost and searching human being, meanwhile allowing Adnam's yearnings to spark a few final plot twists. The energy of the opening half flags in the novel's later part, however. Robinson is visibly developing as a writer, but he's not yet able to make the inner struggles of one man as exciting as the shooting down of a Concorde jet by a sub. Still, his willingness to challenge the rigid boundaries of the military thriller is welcome, particularly as his writing stays always on its toes. Simultaneous HarperAudio; author tour. (May)
close
Details