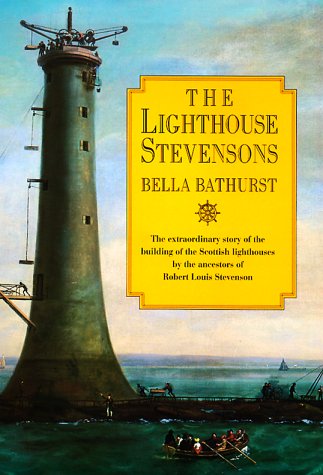 The Lighthouse Stevensons: The Extraordinary Story of the Building of the Scottish Lighthouses by the Ancestors of Robert Louis Stevenson

A real-life Shipping News, Bathurst's flamboyant and elegantly written saga is bursting with life, laced with romantic dreams, oversized ambitions, murder, piracy, nepotism, smoldering feuds, scientific ingenuity and the lonely heroism of men battling the elements. Bathurst tells how four generations of Robert Louis Stevenson's family designed and built the 97 manned lighthouses that speckle the Scottish coast. A reluctant engineer turned writer, RLS transmuted his lighthouse-building expeditions around Scotland's northern coast into Treasure Island and Kidnapped, but he rebelled against his quarrelsome father, Thomas, who tried to corral him into the family business. The rest is literary history. Much less well-known is the Lighthouse Stevensons' extraordinary family history: they built harbors, canals, railways and street lighting systems, and contributed numerous inventions to optics, engineering and architecture. Yet, out of stubborn altruistic pride, no family member ever took out a patent on any of their inventions. Even readers with no special interest in the sea or Scotland will be swept up in Bathurst's narrative, intriguingly illustrated with photographs, prints and drawings. Sir Walter Scott, Michael Faraday and Daniel Defoe stalk through these pages, and Bathurst unveils the Lighthouse Stevensons' battles, accomplishments, frustrations and personal tragedies against a backdrop of the Scottish Enlightenment, the advent of British naval supremacy, the Crimean War, the destruction of Highland society and the uneasy marriage of Scotland and England. She also devotes a marvelous, wistful chapter to the lost art of lighthouse-keeping--all of Britain's lighthouses are now automated, computers having replaced keepers. Her exuberant family drama is an enchantment. Author tour. (Sept.)
close
Details