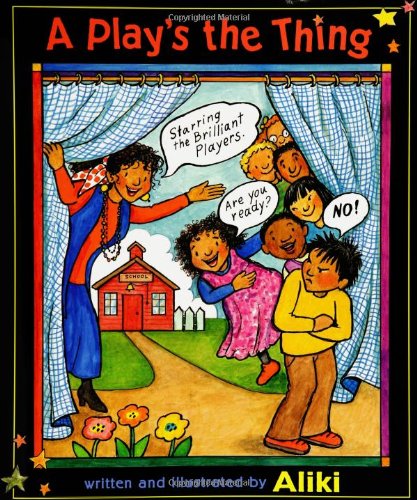 A Play's the Thing

Aliki's buoyant and insightful school tale stars Miss Brilliant—a creative teacher who "celebrates everything"—and her multicultural class. When the teacher suggests they celebrate finishing a test by putting on a play, all of the kids react enthusiastically except scowling José, who mutters, "I don't want to be in it." A snappy text delivered mainly in cartoon-like balloons and Aliki's signature bright and bustling paneled art chronicle the class's preparation for staging "Mary Had a Little Lamb." When Miss Brilliant announces the cast, a mild-mannered student gets the role of bully and José the part of teacher ("I don't want to be the teacher!" he yells). Despite the boy's disruptive behavior and negative attitude, his teacher remains supportive and encouraging. After the curtain rises, "teacher" José looks disapprovingly as the bully acts out, and, when a classmate parades by with a banner stating, "Treat others as you would like to be treated," José declares, "Bullies of the world, !" In the book's satisfying final act, Miss Brilliant asks a suddenly reformed José to fill in as teacher for her while she attends a meeting. Aliki's applause-worthy cast delivers with flair a flurry of messages about kindness and cooperation, with a spoonful of sugar. Ages 5-up.