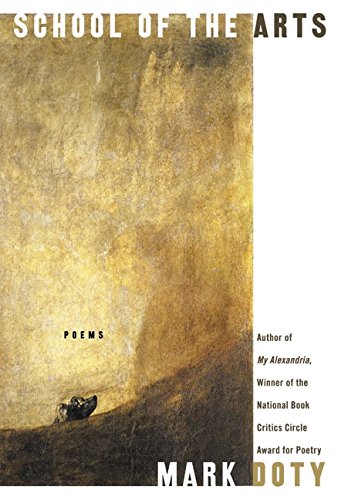 SCHOOL OF THE ARTS

Doty's vivid, inviting, descriptive verse, his celebrations of gay men's sexuality, and his heartfelt, skillful elegies, many of them in response to the HIV crisis, were '90s mainstays. Though he begins this consistently moving seventh collection with poems about famous friends (Stanley Kunitz, the novelist Michael Cunningham), Doty soon reveals the book's major subjects: paintings and painters, life in New York City, aging bodies (his own and others') and the last years or months of Arden, his beloved dog. "Paintings of dying things," Doty remarks, show how "Flesh fails and failure/ is visited upon it"; "the principal beauty of New York lies/ in human faces," though the poet also finds it in sunflowers, in a lost tropical bird, in a darkened bar. Doty has also penned two memoirs ( ; ), and many poems stay close to incidents in his own life; contrasts between day and night (or artists' versions of both), between an imagined heaven and an observed earth, also give the volume a clear structure. "You aren't supposed/ to talk about beauty, are you?" "The Pink Poppy" asks, though it is Doty's choice, and sometimes his triumph, that he talks about it anyway.