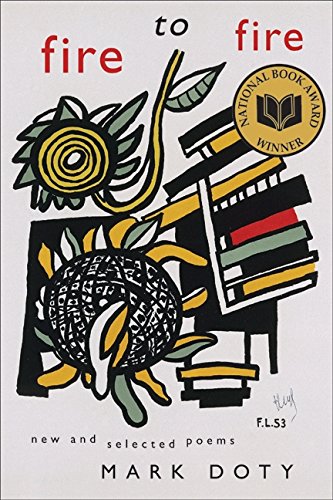 Doty's first book, , appeared in 1987. He has published six books of poetry and four memoirs, all excellent, since. This hefty selection from his seven collections, plus a generous sheaf of new poems, should solidify his position as a star of contemporary American poetry.

Unlike many of his contemporaries, Doty has never eschewed beauty. Indeed, beauty, its unlikely, often unexpected, yet constant recurrence and its elusive fleetingness, is central, as demonstrated by several new poems titled “Theory of Beauty,” each with a parenthetical specific occasion. Beauty is found everywhere in Doty's poems, in a band playing cast-off chemical drums in Times Square, even in Chet Baker falling from an Amsterdam hotel window: “a blur of buds//breathing in the lindens/and you let go and why not.”

The title poem “Fire to Fire,” from (2005) is a gorgeous meditation on the way that life's fire infuses the world, in sunflowers, goldfinches, and even a neighbor's puppy: “fire longs to meet itself/flaring, longing wants a multiplicity of faces,//branching and branching out.” The selections from “The Vault” (which really needs to be read in its entirety) reveal the poetry in men meeting other men's bodies in a sex club, incorporating references to the Middle English poem “Western Wind” and to James Wright's “A Blessing,” and including a subtle revision of Rilke's “Orpheus. Eurydice. Hermes” in which the men are deep in the club's “mine of souls,” “that shaft where inner and outer//grow indissoluble.”

At times the poems unnecessarily explain what their vivid images and striking phrases makes clear, but the commitment to the particular, and to its possibilities, is unwavering. As Doty writes in “Ararat,” “Any small thing can save you.” The poems combine close attention to the fragile, contingent things of the world with the constant, almost unavoidable chance of transcendence, since “desire can make anything into a god.”

Fata Morgana, , Orpheus in the Bronx, .