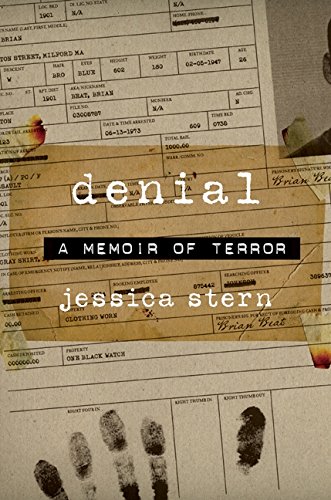 Denial: A Memoir of Terror

In this skillfully wrought, powerful study, a terrorism expert, national security adviser (The Ultimate Terrorists), and lecturer at Harvard, returns to a definitive episode of terror in her own early life and traces its grim, damaging ramifications. Having grown up in Concord, Mass., in 1973, Stern, then 15, and her sister, a year younger, were forcibly raped at gunpoint by an unknown intruder; when the police reopened the case in 2006, Stern was compelled to confront the devastating experience. The police initially tied the case to a local serial rapist, who served 18 years in prison before hanging himself. Stern’s painful journey takes her back to the traumatic aftershocks of the rape, when she began to affect a “stern, hard” veneer not unlike the stiff-upper-lip approach to survival her own German-born Jewish father had assumed after his childhood years living through Nazi persecution. Covering up her deep-seated sense of shame with entrenched silence, Stern had a classic post-traumatic stress disorder—which she was only able to recognize after her own work interviewing terrorists. Stern’s work is a strong, clear-eyed, elucidating study of the profound reverberations of trauma. (July)
close
Details