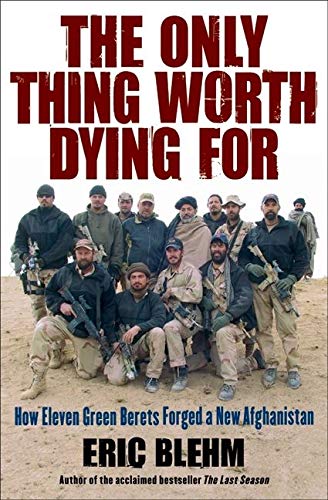 The Only Thing Worth Dying For: How Eleven Green Berets Forged a New Afghanistan

The early, relatively heroic days of the conflict in Afghanistan are memorialized in this engrossing if glamorized war saga. Blehm ( a B&N Discover Award winner) follows the exploits of Capt. Jason Amerine’s Special Forces team Alpha 574, which choppered into Afghanistan in November 2001 to help future Afghan president Hamid Karzai organize anti-Taliban insurgents in the south. The team’s mission—to turn chaotic and perpetually stoned Pashtun tribesmen into effective soldiers—seems impossible and, ultimately, proved unnecessary. Indeed, according to Blehm’s account, the Green Berets’ worst enemies were other Americans: meddling CIA honchos and army brass, a do-nothing Marine officer, and the air force spotter who mistakenly called in an air strike on 574’s position, with ghastly results. The author overplays the comradely bond between Karzai and Amerine, who come off as a latter-day Washington and Lafayette, but doesn’t quite succeed in wringing a military epic out of what was essentially a turkey shoot. Still, Blehm’s warts-and-all account of the U.S. military machine in action is full of tension, color, and real pathos. 16 pages of b&w photos.