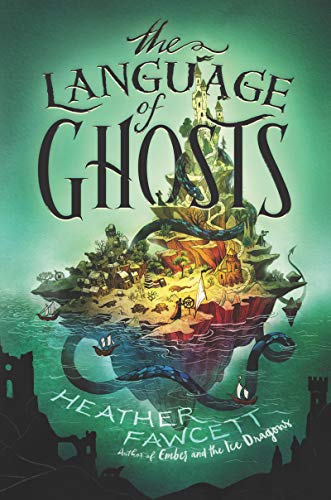 The Language of Ghosts

Two years prior to this tale’s beginning, the Marchena children—dramatic Julian, then 16; practical Noa, then 11; and mischievous Maita, “Mite,” then five—mourn the death of their mother, the queen, on the Florean Archipelago. Soon after her death, they must flee for their lives as royal advisor Xavier Whitethorn stages a coup d’état. In a world with nine magical languages, multilinguals are deemed “dark mages,” prone to villainy; Julian is “the only person in the world—possibly in history—who could speak all nine,” making it easy for Xavier to paint him as dangerous. Two years later, while living on enchanted moving island Astrae, the siblings strive to reclaim their inheritance. Strategist Noa, the only magicless Marchena, is also determined to preserve Julian’s goodness, even as Julian edges toward ruthlessness in his quest for the Lost Words, “magical languages that disappeared a long time ago.” A sly, cake-eating sea serpent; an elderly dragon familiar; and vain otters who can “move in and out of death” make for an endearing supporting cast, while the siblings, with their distinct personalities and inevitable squabbles, make for an authentic focal point. Fans of Eva Ibbotson and Diana Wynne Jones will appreciate Fawcett’s (Ember and the Ice Dragons) well-paced, wholly imaginative middle grade romp. Ages 8–12. [em]Agent: Brianne Johnson, Writers House. (Sept.) [/em]
close
Details