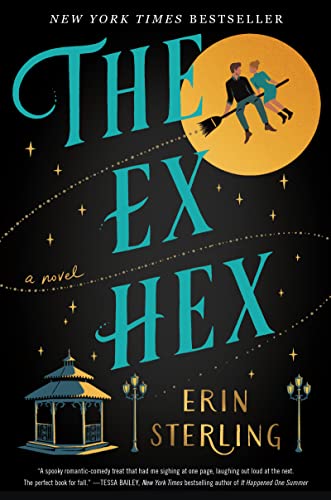 Filled with delightful witchiness and humor, this playful romantic comedy from Sterling (The Wife Upstairs, written as Rachel Hawkins) explores second chances and self-discovery. Nineteen-year-old Vivi Jones fell hard for Welsh exchange student Rhys Penhallow—so hard that her heart shattered when he revealed his father was arranging a marriage for him back home. Despite only recently learning of her witchy nature, the devastated Vivi put a curse on Rhys with the assistance of her cousin, Gwyn. Nine years later, Rhys returns to small-town Graves Glen, Ga., and his trip is disastrous from the moment he steps foot into the town, proving that even as a teenage witch, Vivi packed a punch. The poor man is felled by mishap after mishap until he discovers the magical cause of his misfortune. With time running out before Halloween, when “the curse reaches its zenith,” Rhys and Vivi, now a history professor at the college where they met, must find a way to break the curse before it destroys the town—which means finding a way to make peace with each other. Comedic chaos rules the day, with plenty of laughs overlaying just a touch of introspection as the exes realize how much they still mean to each other. The result is a fluffy Halloween treat. [em]Agent: Holly Root, Root Literary. (Oct.) [/em]

Correction: An earlier version of this review misstated the title of the author's previous book.