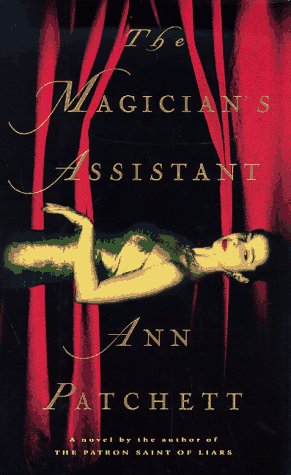 As she proved in her two previous, critically praised novels, The Patron Saint of Liars and Taft, Patchett has the ability to leaven the gravity of sad situations with gentle irony and ultimate hope. Again in this novel, ordinary people drift into offbeat situations; kindness comes from unexpected sources; and the capacity to change, and to endure, can be awakened in a dormant heart. Sabine had been assistant to L.A. magician Parsifal for 22 years when they finally married. She knew he was homosexual; both had mourned the death of his gentle Vietnamese lover, Phan. What she didn't know until Parsifal's sudden death only a short time later was that Parsifal's real name was Guy Fetters, that had he lied when he claimed to have no living relatives and that he has a mother and two sisters in Alliance, Neb. When these four women meet each other, their combined love for Parsifal helps Sabine to accept the shocking events in Parsifal's life that motivated him to wipe out his past. In finding herself part of his family, she discovers her own desires, responsibilities and potential, and maybe her true sexual nature. The muted tone of this narrative matches Sabine's tentative moves in the void of her loss; yet Patchett's sweet and plangent voice often reminds one of Laurie Colwin in its evocation of love that transcends sexual boundaries and in the portrayal of reassuring patterns of domesticity. And Patchett's ability to evoke sense of place--from the quintessential L.A., basking in heat and eccentric characters to the bare Nebraska landscape populated by bland, wholesome Midwesterners (who, of course, are not what they seem) and buffeted by blizzards and temperatures so low that Sabine feels the hook of her bra ""freezing into her skin, the finest knifepoint against her spine""--is near magical in itself. If the narrative moves at a deliberately slow pace, it's rich with the rewarding contrast between the precise mechanics of magic tricks and the real possibility of magic in daily life. $50,000 ad/promo; author tour; U.K. and translation rights: ICM (Oct.)
close
Details