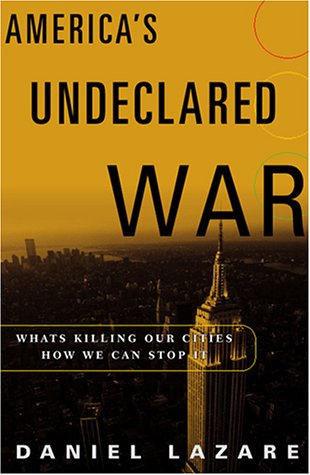 America's Undeclared War: What's Killing Our Cities and How We Can Stop It

""I view great cities as pestilential to the morals, the health, and the liberties of man,"" said Thomas Jefferson, voicing a concern of many early Americans about the moral--and, implicitly, democratic and political--superiority of rural over urban life. If Jefferson's view was predicated on a fear of powerful federal and state governments (dependent upon urban centers), Alexander Hamilton promoted strong, stable states and the idea of cities as necessary to economic and civil health. According to Lazare (The Frozen Republic), the Jeffersonians are winning this ideological fight, much to America's detriment. As a result, he says, the U.S. consistently treats its urban centers with prejudice and neglect. Lazare has marshaled an enormous range of ideas and facts to advance and substantiate his argument, variously suggesting that though cities breed social reform, they are traditionally condemned as hotbeds of immorality; that automobile mass production occasioned urban redesign that endangers the public; that California's draconian 1979 Proposition 13 tax cut further eroded the state's highways and urban schools; and that Jacob Riis's urban reform campaigns were profoundly anti-immigrant and anti-urban. In his last chapter, ""Solutions,"" Lazare calls for implementing our (constitutional) right to amend our ""ancient Constitution,"" and for broader acceptance of emerging technologies like cheaper, faster and lightweight trains. Drawing upon rich historical details, the urban and social theory of John Kenneth Galbraith, Jurgen Habermas, Michel Foucault and Jane Jacobs, and economic and environmental studies, Lazare provides an engaging, provocative and alarming portrait of America at the turn of the millennium. (Apr. 23)
close
Details