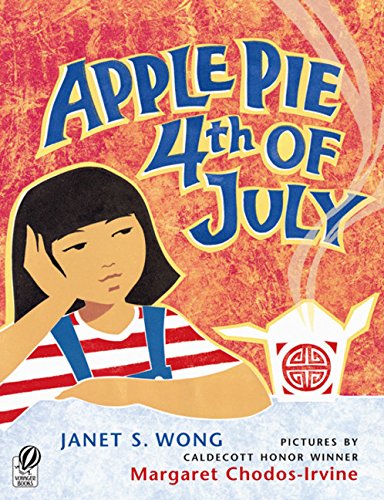 The author and artist teamed for return for this carefully honed story about a girl's experience as a first-generation Chinese-American. Readers first encounter the unnamed narrator as she looks unhappily out the glass door of her parents' market, open for business even on the Fourth of July. Hearing the "boom, boom, boom" of the approaching parade, sniffing the apple pie baking in a neighbor's oven, she is distracted by the cooking smells from the store's kitchen, where her parents are preparing chow mein and sweet-and-sour pork. "No one wants Chinese food on the Fourth of July," she tries to explain, and her prediction seems right as the afternoon lengthily unfolds with almost no customers. "My parents do not understand all American things," she reminds herself, "They were not born here." But the evening brings a steady stream of patrons, and the holiday concludes with the family watching fireworks (invented by the Chinese) and eating—what else?—apple pie. The well-paced text—heavily freighted at the beginning and swift by the end—reflects the girl's changing emotions and moods. The art resembles cut-paper collage. Chodos-Irvine deploys sharply defined objects in a range of colors and patterns to construct harmonious, forthright compositions that will likely prove inviting to readers of many backgrounds. Ages 3-7.